Once again, mrp-bpp.net got down. For the last three days, my domain name, has been permanently shutdown. As I remember this is the third time mrp-bpp.net has been deactivated.Instead of taking care about this domain name stuff, I would rather to move my site into blogspot. Yes, from now on, I’m officially using blogspot as my log pad. And I will use infosecnewbie.blogspot.com as my domain name.
While mrp-bpp.net still got down, for the last three days, I was preparing to finish my first book, which will take a topic about information security, especially about malware and exploit development. Sounds in advanced ? Don’t worry, as I explained before on my first post, I will only talk about newbies stuff (since I’m a newbie), and same with my book, it will only talk about newbie stuff, not more. Then why I took that topics, it’s all about marketing :). Hopefully it will finish by the end of this month. And the book will written with Indonesian language.Maybe next, I will try to write it in English. 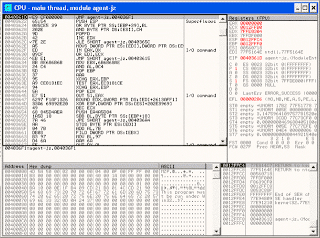 OK, I will tell you a little things about the book itself. I will not tell you the title, I will only tell you about the stuff inside the book (generally). The book will bring you into the world of reverse engineering, Yes! you will know about what RE is and why we do it.Oh, now you want to know what RE is? let see what wiki said about it :

Reverse engineering is the process of discovering the technological principles of a device, object or system through analysis of its structure, function and operation. It often involves taking something (e.g., a mechanical device, electronic component, or software program) apart and analyzing its workings in detail to be used in maintenance, or to try to make a new device or program that does the same thing without using or simply duplicating (without understanding) any part of the original.

In IT world, we are using a specific term, we used to call it as Reverse Code Engineering, we use this term since, reverse engineering in IT world relate with software or computer application.Well, enough for the RCE stuff, we move on the next chapter on my book, I try to explain about malware and all stuff around it. So what is the connection between both of that things?? well you need to read my book to find it out or try to google it.
And on the next chapter, I tried to explain about the “life cycle” of exploit. About how we could find it, how to develop it, from a vulnerability (bug) into an exploit application which could running a payload inside someone else system. Sounds difficult? No, It is not. I’m using a simple language to explain about the stuff and using a live example, so even my 2 years-old daughter could make her own exploit application.

The last chapter, I will wrap it all and try to explain on how we could using metasploit to make our job  goes easiest.
That’s it. I already told you about my book. Hopefully by the end of this month I could finish it and send it to the publisher.